Loading program to those computers was often from cheap tape and for Commodore 64 this was especially slow as Commodore 64 store programs at 300 bit/s data rate for simple reason to be reliable. During loading time from tape you could do something prepare tea and/or eat sandwich 🙂

In example standard Commodore ROM Save would save/load 38K program in 12:20 minutes, lets break those times what exactly is done there, note number are rounded to full second:

The longer program longer waiting. Commodore Vic20 had only 3.5K ram so loading was faster. But  Commodore have 64K ram 16K-48K more than other and also load programs at slower speed than Sinclair ZX Spectrum 16K/48K. 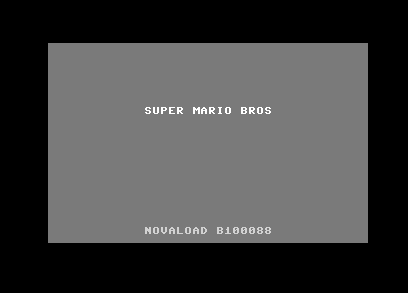 New improvement was needed to load software (games) faster.So various commercial turbos like NOVALOAD with turbo load and protection  started to appear and giving loading some life border stripes, music and even mini games to entertain an user.

This was not for ordinary user to store his own program or game but soon public,even type in turbos, appeared for home users. 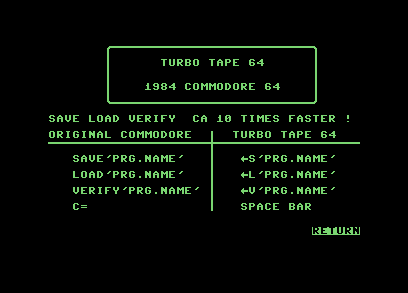 First it was turbo tape 64 and it set standard, others turbo tape loading programs followed soon and were also compatible among last widely used is turbo tape 250.
So what esentially these programs did?

First they removed 2nd (backup) copy, so if you want a backup save to another tape!
Now without backup you already get 50% faster loading time.

Second they speed up writing from 5-7x and more there are several version of turbo loaders with different speeds up.

In example with turbo 250 standard save/load of 38K program would be around 1:15 minutes so lets break those turbo tape loading times to see what exactly was done with turbo tape, note number are rounded to full second: 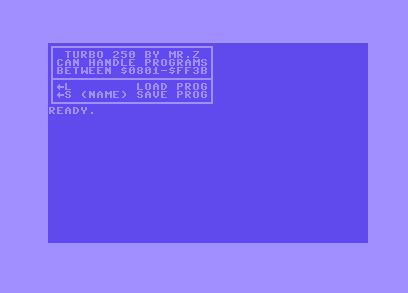 This was fine if you load and record your own software to your tape, but as we humans share and swap public domain software on tapes with our friends we faced another problem with loading, friends tape may not load. 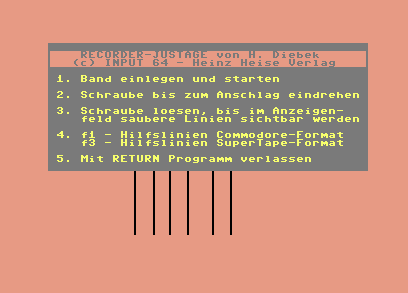 as there were different tape recorders not just commodore ones, but also 3rd party ones they had different azimuth of recording or reading, and of frequent use sometimes screw would loose a bit on cheap ones, so all of them had a hole to adjust head azimuth with help of additional hardware (speaker) or special created software for just this like Recorder Justage.

Of course there was also another question if you have misaligned head azimuth how to load Record Justage? Solution were various trial and error, small speaker, VU Meter mod, some had two tape recorders and used tape copy devices.

And there were also cartridges.