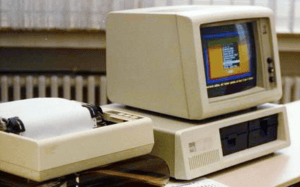 For the $1,565 price one got a system unit and a keyboard. Unit containing only 40K of ROM (read-only memory) and 16K RAM of user memory, built-in speaker for tone generation (today some would say music).
Most important it offered five expansion slots for expanded memory, display and printer ports, game paddles.

Keyboard contained 83 keys and was connected to the unit by a coiled cable, so one could move keyboard , but added also numeric keypad and several special keys for writing and editing text.
Extra options that were available were color display, a printer, two floppy drives, extra ram, serial and game adapter and software packages, like text processing.

Most important options were:

But the new IBM PC could hook up to the home TV set and you could play “some” games.

In 1983 Compaq Computer Corporation will release the first compatibility clone of the IBM PC, but with its own BIOS.
Compaq incorporate an identical copy of PC architecture, since IBM architecture was quite open and IBM PC was made using (′′ assembling ′′) products available (off shelves components)  on the market.