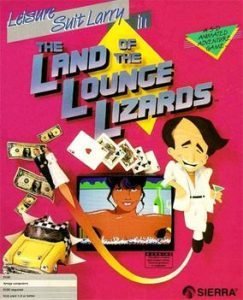 A collection of script and definition files related to the game “Leisure Suit Larry in the Land of Lounge Lizards” (often simply called “Leisure Suit Larry”) created by Al Lowe based on the game “Softporn/Super Stud Adventure” by Chuck Benton. These collection are  generated  between February and June of 1987. (Lowe at one point mentioned how slow initial sales of Leisure Suit Larry made him feel he had “wasted six months” of his life, so that timeframe for work could be considered the development time).

This collection contains only the scripts and definitions for Leisure Suit Larry – it will not specifically compile into a game, instead requiring access to a Sierra On-Line engine (Adventure Game Interpreter/AGI) that takes these definitions and drives the games.  AGI/Adventure Games Interpreter source code is not included in this repository.

This is another fine work by Jason Scott. Thank you.

If you have not heard for LSL (Leisure Suit Larry) or you did not played before you have missed a lot.

Here is shorp plot: The protagonist Larry Laffer is a 38-year-old (40-year-old in the 1991 remake) “loser” who lives in his mother’s basement and has not yet lost his virginity. Having grown weary of his lonely existence, he decides to visit the resort city of Lost Wages (a parody of “Las Vegas”) hoping to experience what he has not lived before and to finally find the woman of his dreams. Larry starts with nothing but an out-of-style 1970s disco-era leisure suit and $94 in his pocket. His quest involves four possible women: a nameless, seedy-looking sex worker; Fawn, a club-goer of low moral fiber; Faith, a receptionist who (true to her name) is faithful to her boyfriend; and Eve, a bathing beauty and Larry’s ultimate goal.

Source:Leisure Suit Larry in the Land of the Lounge Lizards